The U.S. House of Representatives recently passed the Agriculture Act of 2014 by a vote of 251 to 166. The Senate followed a week later passing the bill with a vote of 68-32. With the President’s final approval, this act will serve as U.S. agriculture’s principal policy for the coming years.

What is more commonly known as “The Farm Bill,” this policy serves as the United States primary agriculture and food policy dating back to its inception during the Great Depression. Under normal government operation, this policy expires every five years. We have been under a two year extension of the “Food, Conservation, and Energy Act of 2008,” which expired in 2012.

President Obama has been relentless in his efforts to minimize reform of the SNAP program (Supplemental Nutrition Assistance Program), which has accounted for approximately 80% of the spending of the previous farm bill programs. This program has caused the majority of the debate over the new bill and, with this new bill, it appears a compromise has been reached. The new bill will cut food stamp programs by $8 billion, with several economists citing this will impact 850,000 households in the U.S. receiving about $90 less per month. With this cut to the food stamp program, the new bill does increase financing to food banks by $200 million. The chart to the right looks at the proposed spending from the “Agriculture Act of 2014” over the course of the next ten years. As you can see, food stamps and crop insurance still remain the primary focus of government spending.

One of the more notable changes to the new bill comes with the elimination of the Direct and Counter-Cyclical Payment program. In the past, around $5 billion in annual payments were made to eligible producers enrolled in the program who complied with conservation and reporting requirements. Focus from the previous Direct Payment program goes to the Price Loss Coverage (PLC) or Agriculture Risk Coverage (ARC) which are authorized for the 2014-2018 crop years. Commodity program payments are not to exceed $125,000 for any one individual or $250,000 to a producer and spouse. 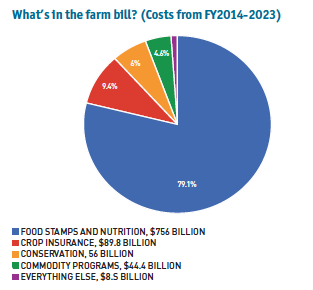 More reform was added to the nation’s Federal Crop Insurance program, which is a $9 billion a year industry. The government is responsible for approximately 62% of annual premiums in the Federal Crop Insurance program. Some of this reform includes higher subsidy levels for enterprise insurance, new revenue-cost margin insurance, increased data sharing, conservation incentive, as well as increased subsidies for beginning farmers and ranchers. A proposal was made to “cap” insurance subsidies for high income individuals. This item was removed from the bill.

Ending the extension on the Food, Conservation, and Energy Act of 2008 and passing the Agriculture Act of 2014 will allow agriculture to begin moving forward and making plans according to the new program. According to the Congressional Budget Office, the new bill is projected to save around $1.65 billion annually. Changes to the food stamp program, commodity program payments, as well as the Federal Crop Insurance program, highlight the key topics for agriculture producers as they are now aware of what the governing policy will be for the next five years.