Prime Central Illinois farmland values have increased nearly every year since 1987. The increase in farmland values was very steady from 1987 through 2002, averaging an increase of approximately 4% per year. Beginning in 2003 is when things started to change more dramatically. Individuals wishing to defer capital gains taxes, from sales of development properties in urban areas, sought out prime farmland to replace the sale of their farmland to developers. 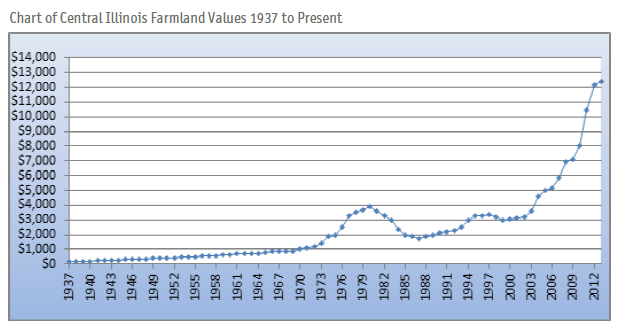 These sales become known as 1031 exchanges (named after the IRS code for tax deferred exchanges). This resulted in more buyers than sellers and farmland values rose accordingly. From the beginning of 2003 through 2012, farmland values increased at a rate of 15% per annum and, just when people thought there couldn’t be another double digit increase in land prices, the drought of 2012 rocked the commodity market as corn soared to over $8.50 per bushel and soybeans approached $18.00 per bushel. Most farmers were well insured and gross farm incomes were at record highs even though yields were very modest.

There was very little farmland on the market in the fall of 2012 through early spring of 2013 and farmland that was marketed brought top dollar. Each auction that occurred seemed to bring more than the last. Sales consisting of high quality Central Illinois farmland were consistently bringing $13,000 to $14,000 per acre. This was an increase of nearly 25% per acre over the same period the previous year.

Fast forward to the fall of 2013. Coming off a growing season that produced surprisingly good yields, the corn carryover for the 2013/2014 year is projected to be a comfortable 1.63 billion bushels which translates to very little, if any, rationing of grain (carryover is the amount of corn that is projected to be on hand when the new crop (2014) is harvested). The result of this projected carryover is that corn prices may fall below $4.00 for the first time since 2010. This has created a cautious mindset which slowed farmland sales in the fall of 2013. Prime farmland that had been selling in the $13,000 to $14,000 per acre range has now seen several sales back in the $11,000 to $12,000 per acre range.

In addition, there has been a major shift in the type of buyers over the past year to 18 months. Farmers now clearly make up the largest percentage of farmland buyers at 73%, as outside investor interest has slowed with the decline in commodity prices. Where to now? Commodity prices and interest rates become major factors in the short term forecast of the farmland market. If we raise another large crop similar to 2013, many believe corn prices will definitely drop below $4.00 per bushel. That price range cannot support the cash rental rates being paid today and, since farmland values are generally based on earnings potential, it is only reasonable to anticipate that a drop in rental rates could be followed by a drop in land prices. This is not saying there is a bubble in the farmland market and it is going to burst. Recent acquisitions of farmland have been made with minimal leverage and low interest rates. The current farmland market is quite different from that of the 1980’s. The softening of the farmland market in the fall of 2013 was not surprising as markets have corrections all the time. However, the primary fact remains, there will be an additional 2.5 billion more people to feed by the year 2050, translating to a total worldwide population increase of 34%. The long-term outlook for farmland remains bullish, but nothing goes straight up. Farmland was, is, and will continue to be a solid long-term investment, but it is just that, a long-term investment.

Farmland values peaked in the first half of 2013 and, since that time, have declined approximately 5% from the peak value. Even with a pullback of land prices from the peak, Central Illinois farmland values, on average, increased nearly 2% year over year (based on the following table) and provided a 3-4% cash return. The average of the sales documented is $12,388 per acre. The following is a table of 42 sales in 11 counties. The sales were all high quality, high percent tillable properties.

We are very active in rural real estate brokerage. If you have an interest in buying, selling or exchanges of farmland, please feel free to contact any of our First Illinois Ag Group staff.