Expectations of high corn yields for 2014 are a result of generally favorable growing conditions to-date and on the high percentage of the U.S. corn crop rated in good or excellent condition.

Scott Irwin and Darrell Good from the University of Illinois researched the summer weather conditions that contribute to high U.S. corn yields with comparisons to 2014:

The summer weather conditions in those six years that contributed to the very large U.S. average corn yields relative to trend were identified. During those six years, June was slightly drier than average and July and August were slightly wetter than average. For those same high yielding years, temperatures averaged 1.0 degree below the long-term average in June, 2.0 degrees below in July and 2.2 degrees below in August. 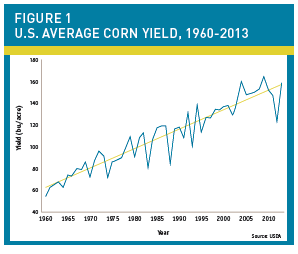 High U.S. corn yields have been associated with summer precipitation that was near to slightly above average and summer temperatures that were well below average. As expected, decline in yields is steep for low levels of precipitation. Cool weather slows down the maturation of the corn plant and, therefore, provides a longer period for adding dry matter weight to each kernel of corn.

Many, including our Ag Services Department, are projecting yields on top farms in excess of 213.0 bushels per acre. However, keep in mind there is no historical precedent for an extremely high U.S. corn yield during a year with well above average June precipitation. We also have August weather to consider, and an early frost would curtail yields, especially in the Northern Corn Belt.