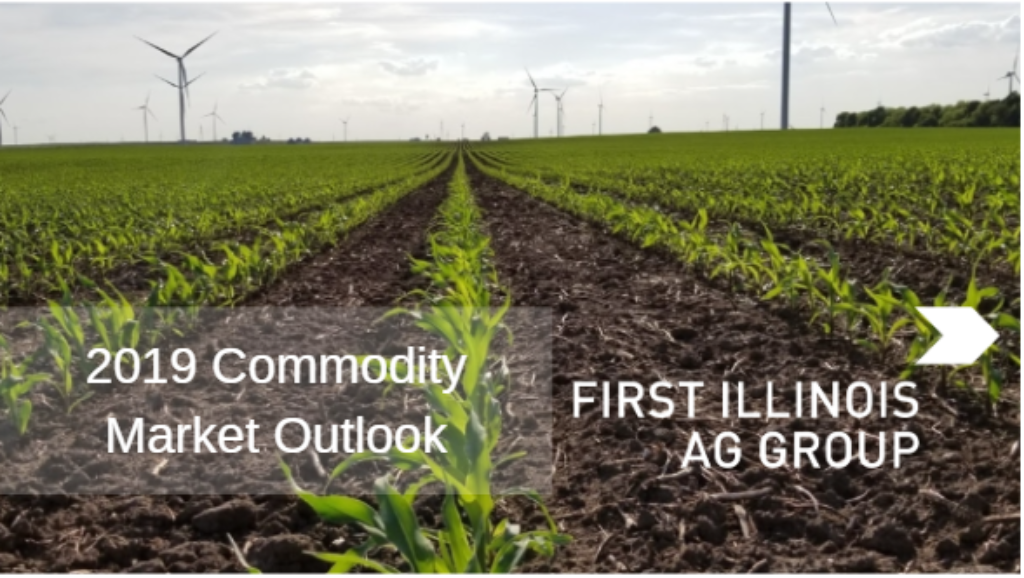 USDA has estimated 2018 U.S. corn production at 14.4 billion bushels, 189 million bushels less than last year and the third highest on record. This year’s yield of 176.4 bushel per acre is the same as last year’s record high yield. Corn yields have achieved a remarkable run of success the past five years with yields exceeding all previous yields. U.S. harvested corn acreage is 81.7 million, one million acres less than 2017.

USDA has estimated 2018 U.S. corn use to be 14.9 billion bushels, the second highest on record. Domestic usage continued its steady increase since the 2012 drought. Feed for livestock is at the highest level since 2005 at 5.4 billion bushels. Ethanol usage, at 5.66 billion bushels, dropped 30 million bushel from last year. Exports are projected to be slightly higher than last year at 2.5 billion bushels. China historically imports very little U.S. corn. The most recent tariffs that China began have little effect on U.S. corn exports.

USDA has estimated 2018 corn carryover to be 1.7 billion bushels, a 405 million bushel decrease from last year. Remarkably, we are projected to use 445 million bushels more than we produced with the third largest crop in history.

Demand remains robust. Positive factors in 2018 included the change to allow year round 15% ethanol in the U.S. gasoline supply. Ethanol usage had topped out at 10% of U.S. gasoline supply. Passage of a new trade agreement with Mexico and Canada would help to reduce uncertainty. We are hopeful trade negotiations with China will result in normal soybean exports which will indirectly support corn prices. Unlike soybeans, corn carryover is actually projected to decrease. Any concerns over South American and/or 2019 U.S. corn production should give the corn market optimism to rally out of the extended price range.

Carryover of 910 million bushels of U.S. soybeans is overwhelming. Even if exports were to increase to pre-Chinese tariffs, carryover would still be near 700 million bushels. Events that could have serious positive impact on reducing carryover would be significant Chinese purchasing, and poor yields in the present South American crop, and then lower production from lower yields and acreage in the U.S. There needs to be a combination of these events to move soybean prices out of the recent trading range.